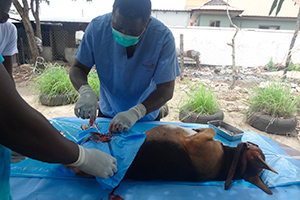 The Animal Birth Control Project (ABC) which was supported by Vets without Borders Denmark, this month of May, 2018 has helped stray cats and some dogs in Dar es Salaam. The number of community cats has greatly increased in the city. It has been heavily raining almost throughout the month and the cats were scattered and displaced from their usual habitats in restaurants and garbage heaps.

The dogs and cats were trapped while feeding in garbage heaps and were some from restaurants. These animals  sometimes fight for dominance especially males causing injuries and most of the adult cats were fierce and they always charged when approached but great we have all the handling equipments like traps (manual and automatic), cages, hard long gloves(gauntlets).

Because of the heavy rains, we found some orphaned kittens and their mother was not known where she was probably was swept by floods and these kittens are under our care at the moment.

The ABC reached and did a total of 114 cats and dogs but we treated wounded cats and all were vaccinated against rabies, de-wormed and applied with flea meds. We also made a small ear tip cut on the left ear for identification purposes so as we do not re-trap or do ABC on the same animals which were done previously.

We also fed and gave water to the cats and dogs while they were waiting to be returned to their respective areas, it was after one day of progress observations.

Thanks to Vets without Borders Denmark for helping us with this valuable project and making it a great success but also to our TAWESO volunteer teams, veterinarians and the vet assistants.

How the Funds were used in Euro: